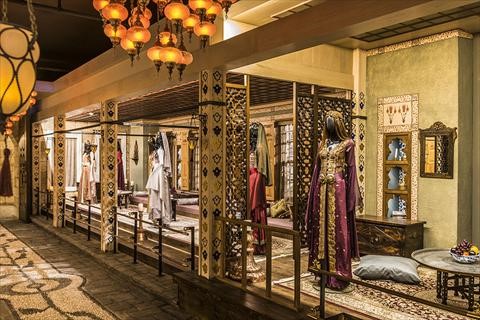 The exhibition “Hareem Al Sultan” is organized by the Istanbul Entertainment Group and the Company Merass of Scheiches of Dubai Mohammed Bin Rashid Al Maktoum and was inspired by the popular Turkish TV series “Magnificent Century”. Now the exhibition has opened in Dubai CityWalk.
The world premiere of depopulation took place in Istanbul in November 2014 and went under the Culture 2015, inter alia, to Doha, Qatar.
The exhibition takes visitors on a journey through the palace of the “splendor Vollen century” and shows them how it feels to be in an era of greatness and dangerous ambitions to live.
Covering an area of ​​1,300 square meters authentic artifacts of ancient palaces are issued. The exhibition will remain open until May for visitors.
The popular Turkish TV series “Magnificent Century” was first broadcast in 2011, reaching an audience in over 50 countries. More than 200 million television viewers worldwide followed the story of Sultan Süleyman and Hürrem.